I’d like to talk to you about Iannis Xenakis, this Greek composer who created most of his work between 1950 and 1980.

This isn’t going to be a biography, it’s going to be about the nature of his work and why I consider him to be a brilliant sound designer way ahead of his time.

We all have those artists who inspire us greatly in our quest for an individual creative voice. Xenakis is most certainly on the top of my list, and I hope this post will help you understand why.

This also isn’t going to be about his music itself. Confession – I am familiar with only very few pieces from Xenakis (something which I need to address shortly..). What fascinates me about him are his ideas, his vision, his audacity, his overall multidisciplinary achievements, his daring, relentless creativity.

This compilation of essays enlighten the reader about Xenakis’s life, philosophy, and artistic and personal achievements. You could have never heard his famous Metastaseis and still enjoy the book greatly.

Xenakis was a creator before anything else. It would be a great misjudgement to label him as a composer only. His work involved experimental composition, experimental visual art and installations, experimental architecture, and much more. He was an experimenter. He dared to question our ideas about art, society and even science. His own passions were many, including archaeology, literature and astronomy.

When composing, he had a way of ‘imaging’ music which was far from our conventional music notation system with lines and dots. He wasn’t either creating graphic scores the way some of his contemporaries such as John Cage had started doing a little earlier in time. He was rather working through strategies to deploy physics and mathematics as means to organise sound. This is a direct reflection of his compositional philosophy, which was founded on mathematical and scientific ideas. 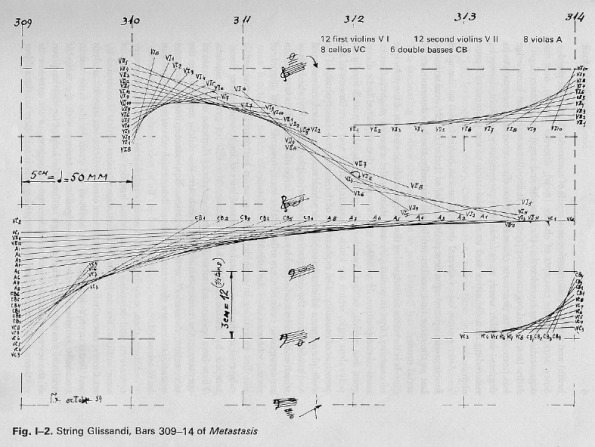 This way of drafting his work on paper and thinking through the hand was very much foreshadowing the avenue of Process Art (of which I’m a big fan of as well).

Xenakis once remarked that he did not compose at the piano, that instead his tools were mathematics and computer science.

One of his most brilliant insights was that it is by going to the very physical foundations of artistic phenomena – and their basis in physics – that one can find viable ways to move forward.

As much as Xenakis’s music was said to sweep over you like a force of nature, his artistic approach was very much inspired from it too.

Some tragedies in his life have led him to find meaning in things beyond the reach of accident and time, a realm of immutable laws he would find mirrored in Nature.

I think it is a pretty strong statement to be relying on Nature itself as means of last resort to find some sort of bearing in life, of stronghold, because everything else just isn’t strong or meaningful enough.

He desired to represent through music how everything is in flux, how everything around us moves, shifts, is in constant turmoil, and that we navigate in the provisional, we must reconsider each thought at every instant.

His piece Matastaesis (1953) was the first to express this vision, describing certainty and uncertainty, timelessness and motion. He relied partly on the probability theory to achieve this.

He then developed an approach that would later become one of his trademark sound, first heard in Pithoprakta (1955-56): the cloud of points. Xenakis suggested that these are like things heard in nature, such as swarms of cicadas, or rain pattering on a roof. This active listening for natural sound events is one of the many things I find inspiring in Xenakis’s sonic creativity.

His approach, which sometimes seemed hyper-cerebral, was in fact deeply grounded in nature as well as in human experience.

He enjoyed creating immersive environments (which you’ll find out is a passion of mine if you browse this blog), of which his site-specific multimedia works are some examples, such as the Philips Pavilion and its 425 coordinated loudspeakers.

One of his later pieces, Terretektorh (1965-66), was said to be partly inspired by one the Xenakis’s many intense experiences with nature and its sounds;

Xenakis spent summers in Corsica in the company of his wife and daughter, surrounded by the sea, gazing at stars, immersed in forest sounds, or rattled by the intensity of a tempest. It was an almost violent primordial feeling he was after, sound shifting from instrument to instrument, as if between loudspeakers – a line traced in space.

His passion for astronomy was also palpable in his Diatope (1978) in Paris, where lights, lasers, pivoting mirrors and prisms created galactic movement rendered accessible. 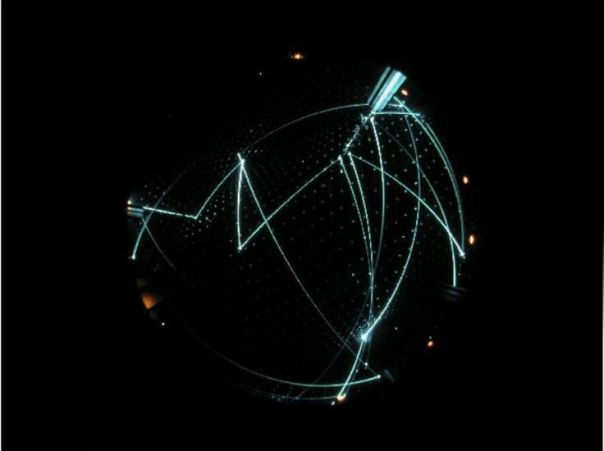 In an era where the worldwide avant-garde music scene consisted of a handful of influential composers tightly bound by common beliefs, Xenakis had the audacity to challenge and question the very foundations of their aesthetic choices.

While both Boulez and and Xenakis somewhat shared the view that new music had to reflect a modern conception of a universe in perpetual expansion, they had disagreeing ways of expressing it. Boulez and the other avant-garde composers’ music was known as ‘pointilliste’, featuring complex textures and meticulous organisation which in the end sounded more like restless randomness, as where Xenakis opted for a more global approach, more natural sounding to the ear, giving up the note-to-note approach of serialism for one better suited one to manipulating these global entities of density, texture, and tendency towards greater or lesser complexity.

This consideration for the medium and its reception, sound in this case, is why I consider him a brilliant sound designer. His creative approach wasn’t only about finding a way to send a message through art, but also about how it would be received. This message will be heard, it is thus important to factor in the human ear and how our brains will interpret this audible message.

This passionate artist, who became a famous timeless composer without any previous musical training, was always one to stand apart, not altogether fitting in any of his contemporaries’ company. An aura of loneliness surrounds his work, even his name ”Xenakis” can be translated as ”little stranger”.

I will leave you with an excerpt from Xenakis’s daughter’s memories, Mâkhi, featured at the end of the book.

He sometimes stared at the sky, searching for that particular moment when he could at last, in extreme hand-to-hand combat, draw close to the untamed elements of nature, so as to nourish and renew himself in them.

The thunder rumbles, we’ve taken refuge in our tent, And again his face is radiant, peaceful. He uses his watch to calculate meticulously the number of seconds between the brutal bursts of lightning that tear apart the night and the explosions of thunder as they grow closer and closer to us. When the storm is at last directly above our heads he leaves the tent, half-naked; he runs and disappears little by little into this grandiose spectacle of sound and apocalyptic light.

In the early morning, when dew covers every particle of the arid countryside, he crouches for hours, scrutinizing each very particular spiderweb. A multitude of parallel stretched lines sktetch out complex architectures comprising cut-off cones, convex and concave surfaces conjoined – they are the natural ancestors of the Philips Pavilion and the polytopes…

Find the sound effects you need – hand-picked from the best indie sound creators in the world.